Something there should probably be more of on this site… a look behind the scenes at the making of some idents. This making of video comes courtesy of Dan at Proud Creative and gives us a peek at some of the production that went into making this awesome ident package.

Check out the ten idents that make up the finished product here.

Update: Check out the Chaser’s lastest run in with Today Tonight here.

The lesson in this weeks ‘What have we learnt from current affairs’ may have been the “desperate angles” journalists go to to make a story out of nothing, but the real lesson was; How to not act like Naomi Robson… by Anna Coren.

Coren welcomed Chas and Andrew into the Today Tonight studio, made fun of cheque book journalism, and took with good humor the jabs they made about the show. And while this doesn’t make Today Tonight any less a waste of prime time television, it makes Anna Coren look a little more human. Download the whole episode here.

Update: Chas clarifies some stuff in the comments.

With former Lateline host Maxine McKew and former weatherman Mike Bailey both leaving the ABC to run in Labor party seats against the government, the Chaser took it upon themselves to see who else they could recruit from the national broadcaster to run for government.

Big Brother launches its eighth season today in the UK. Broadcast on Channel 4 and E4, the show suffered some worse publicity than usual earlier this year with accusations of racism and bullying saw the shows major sponsor, The Carphone Warehouse drop out of the latest season, only to be replaced by Virgin Media.

The redesigned logo in the above promos have been described as a “centrifugal inter-locking RGB rainbow test card”.. which will apparently make sense at some point during the show.

Tracy, Jessica, Sarah, Kellie.. and now Lisa. A new female host for the Nine Network’s Today show started yesterday, and while the usual first-day-of-a-new-host ratings were up, they weren’t as high as when Mrs Murdoch started her run, and quite frankly Nicole Kidman could host the show, but after the first day curiosities, the ratings would go back to what they are always are.

I have to agree with Crikey, and ask why “is Karl Stefanovic a protected species? After all, he and Richard Wilkins have been tried and found wanting by viewers — so why aren’t they boning candidates?”. They’re rumours that the show will be making the Sunrise-esque move to Park Street to be part of the city bustle, but besides people holding “watch Sunrise” banners in the background I’m not sure what good it will do.

The show needs to relaunch completely, new name, new set, and an actual focus, well, a focus beyond just copying Sunrise. If Sunrise is the friendly breakfast show, why not make Today the serious news breakfast show? Karl’s already dressed for it.

Channel 4 are still asking celebrities questions it seems, and their still splicing their answers into a very cool, less forced use of a networks on air talent. This time they’re asking what the first song they bought was. Unlike the other videos in this series, this one includes some of the cast of Ugly Betty, which is hopefully a sign that they intend to continue to update these, because for reasons I can’t define, I just love these.

To see; favourite swear, favourite invention and happiest moment click here and please let me know if you see anymore on air I don’t already have.

Tonight on SBS at 9:30pm is a film called Sommersault. Released in 2004, and directed by Cate Shortland, the film stars Abbie Cornish and Sam Worthington.

The story starts in the “unreality” of Canberra, where a 15 year old incredibly naive Heidi makes a pass at her mothers boyfriend, only for her to walk in on it. Heidi flees Canberra for the snow town of Jindabyne, where she meets Joe…

I realise thats probably the worst summary of a movie in history, but I’m really more a TV guy. That said, its a beautiful film, with its soundtrack by Decoder Ring, so if your not doing anything else tonight, give this Australian made, official selection for the Cannes Film Festival movie a chance. 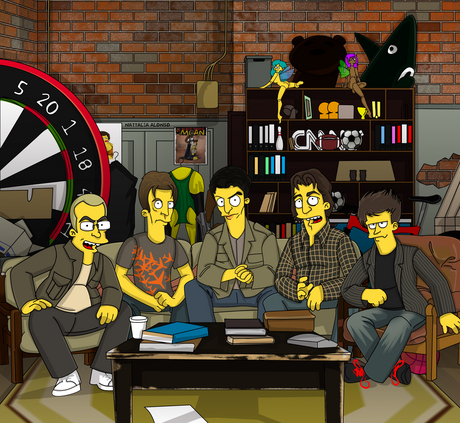 If you live in the UK, your lucky enough to be waking up to BBC Radio 1’s Big Weekend, the largest free ticketed event in Europe, and if your waking up in Preston, you’re even luckier because your probably going to it.

Featuring a huge line up of acts including but not limited to; Bloc Party, Maximo Park, Razorlight (the first video features this song), Scissor Sisters (second video) and Kaiser Chiefs, the closest free event we would have to this in Australia would be Triple J’s One Night Stand.

Almost as impressive as the acts themselves though is the BBC’s coverage of the event, which spans not only Radio 1, but also nightly highlights on BBC Three and live coverage of the whole thing on the red button’s BBCi. The UK really seems to have embraced the promise of digital television, hopefully Australia will too.. eventually.

And, seeing as its a radio event, here’s some audio…

END_OF_DOCUMENT_TOKEN_TO_BE_REPLACED

Motion Foundry continue their series of Channel Ten idents, this time forking off into the world of News. These are just as slick as the other Ten idents and stick with the “I believe..” concept. The black background actually feels more effective than the white backgrounds used in the other idents.

That said, I hardly ever watch Ten News, and doubt I would have seen these if it wasn’t for Alex at Motion Foundry, so thanks!