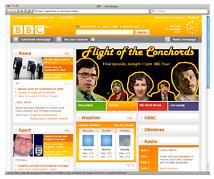 In April 2006 the BBC ran a competition asking for a new design for the frontpage of their crazy popular website bbc.co.uk. I entered that competition and was one of ten runners up. My design for the site scored me a iPod Nano which I later gave away to a reader. The BBC has finally launched a beta version of the new look front page and its available for the worlds criticism here.